Tumor-derived exosomes (TDEs) play a pivotal role in tumor establishment and progression, and are emerging biomarkers for tumor diagnosis in personalized medicine. To date, there is a lack of efficient technology platforms for exosome isolation and characterization. Multiple myeloma (MM) is an incurable B-cell malignancy due to the rapid development of drug-resistance. MM-released exosomes express the immunoglobulin B-cell receptor (Ig-BCR) of the tumor B-cells, which can be targeted by Idiotype-binding peptides (Id-peptides).

In this study, researchers at Magna Græcia University analyzed the production of MM-released exosomes in the murine 5T33MM multiple myeloma model as biomarkers of tumor growth. To this end, they selected Id-peptides by screening a phage display library using as bait the Ig-BCR expressed by 5T33MM cells. By FACS, the FITC-conjugated Id-peptides detected the MM-released exosomes in the serum of 5T33MM-engrafted mice, levels of which are correlated with tumor progression at an earlier time point compared to serum paraprotein. These results indicate that Id-peptide-based recognition of MM-released exosomes may represent a very sensitive diagnostic approach for clinical evaluation of disease progression.

Workflow of the experimental design

The Igs secreted by 5T33MM cells were purified from cell supernatant using Protein G affinity chromatography, and used as bait to isolate phage ligands from the C7C phage-displayed peptide library fused to the M13 minor coat protein. ELISA was performed to select ligands with distinct affinities for their cognate Ig-BCR. Synthetic peptides corresponding to the peptide insert of phage clones were assayed for their antigenic properties out of the phage context. The purified 5T33MM-released exosomes were characterized by scanning electron microscopy (SEM), Zetasizer and Western blotting analysis. SMNPs were decorated with biotinylated anti-CD63, incubated with RED-EXO-labeled exosomes, and analyzed for the binding of FITC-conjugated Id-peptides by flow cytometry. For in vivo analysis, 5T33MM cells (1 × 106) were intravenously injected in C57BL/KaLwRij mice (10 females at 8 weeks of age). Tumor-derived exosomes and paraprotein levels in peripheral blood were monitored every 7 days up to 35 days post-inoculation 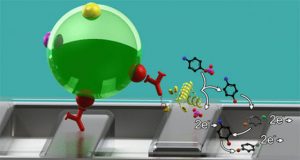 Nanosensor for detecting cancer in blood 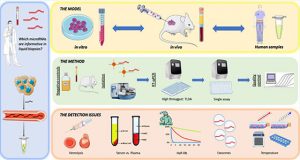 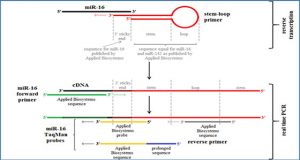 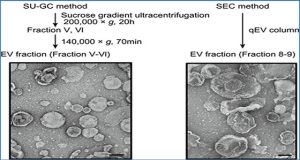 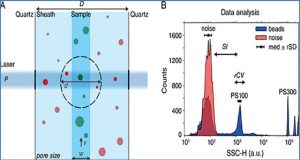 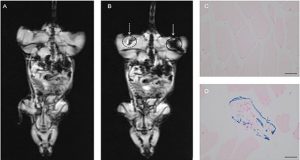