Traditionally, all proteins released into the extracellular space were thought to be transported via the ER-Golgi dependent classical secretory pathway. However, non-classical secretion of proteins/RNA through extracellular vesicles (EVs) has recently been reported to contribute to the milieu of extracellular molecules that mediate plant-fungal interactions. EVs can be broadly classified into exosomes and ectosomes . Exosomes are secreted microvesicles (30–150 nm in diameter) of endocytic origin that are released by multiple cell types and are conserved across various species.

Recent studies on mammalian systems have highlighted the role of EVs in cell-cell communication and the intercellular transport of cargo (proteins, nucleic acids, and carbohydrates). Whilst the role of EVs in plant-fungal interactions is still poorly defined, this non-canonical secretory pathway has been proposed as an alternative route for the secretion of virulence and defense molecules by fungi and plants, respectively . The basic requirement for successful host colonization is the establishment of a parasitic relationship between the fungal pathogen and the host. This requires the induction of specific defense mechanisms in the fungus for protection against the plant innate immune system. Evasion or suppression of the plant defense response is thought to be regulated by virulence factors that are secreted from the fungus and act at the plasma membrane or in the cytoplasm of the plant cell . 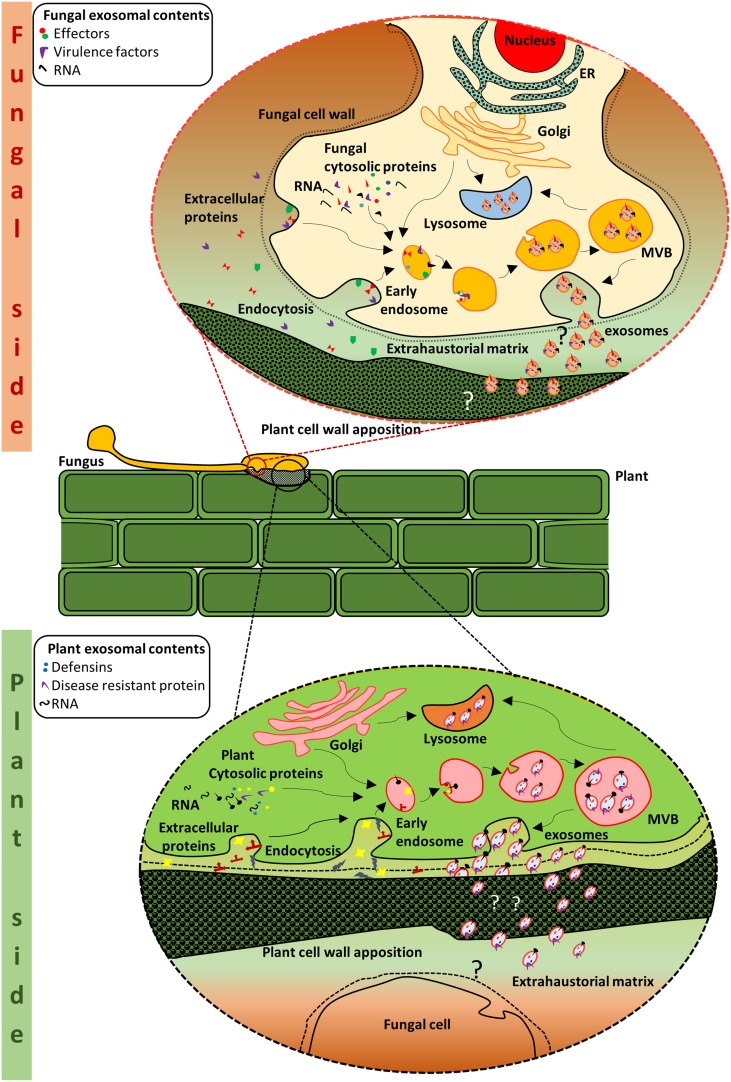 Schematic representation of putative crosstalk via EVs at the plant-fungal interface. Exosome biogenesis and secretion in the fungal side: MVBs are formed from the early endosomes. Within the MVBs, invagination of the limiting membrane results in the formation of intraluminal vesicles which are packaged with protein and RNA cargo from the cell. The MVBs either fuse with the plasma membrane or with the lysosome for degradation. When the MVBs fuse with the plasma membrane, the intraluminal vesicles are released as exosomes. The exosomes are considered to contain various molecules including effectors that are required for the establishment of the pathogen and/or infection. Exosome biogenesis and secretion in the plant side: Similarly, on the plant side, vesicles from the MVBs may contain innate immunity proteins and defense molecules that can impede fungal growth or lead to alterations in the fungal cell wall. Thus, the plant and its fungal counterpart could utilize the exosomes as one of the many strategies in their mutual struggle for survival. 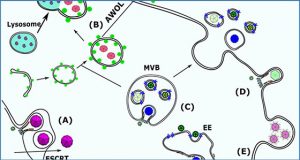 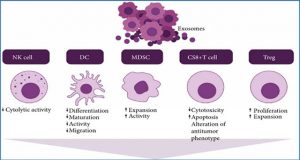 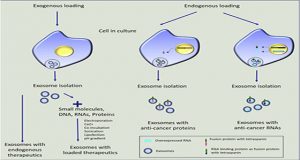 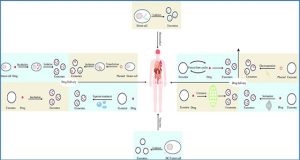 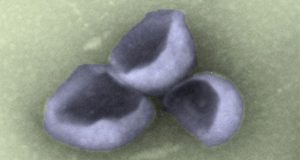 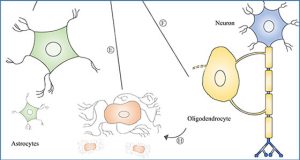 The role of exosomes in cancer-related cognitive impairment